Stuck in What – Understanding Inflammation and Chronic Wounds 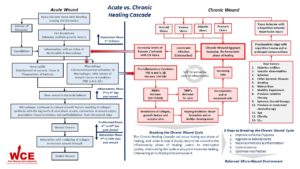 Acute wound healing is an orderly and efficient process which is characterized by four distinct, but overlapping phases: hemostasis, inflammation, proliferation and remodeling.  In non-healing chronic wounds this efficient and orderly process has been lost due to the absence of the hemostasis phase, causing these ulcers to become locked into a state of chronic inflammation that is self-sustaining and characterized by abundant neutrophil infiltration with associated reactive oxygen species and destructive enzymes.  Healing will only occur after this prolonged inflammatory phase is broken and the wound’s micro-wound environment is once again in balance thus allowing the wound to proceed through the remaining stages.1,88   At any point along the healing continuum a wound can shift back into the inflammatory phase of healing.  When this happens, if the inflammatory cycle is broken quickly, the wound will continue to move forward along the healing continuum. If not, the wound will slowly return to a prolonged self-sustaining inflammatory phase and all progress will be lost.1,13,14,88

To develop an effective treatment regimen, a clearer understanding of the underlying pathology that results in a persistent cycle of inflammation and repetitive tissue damage is required.  By bringing together relevant science and quality research, we aim to provide basic insight into the effects of this prolonged inflammatory phase of chronic wound healing.

The single most important aspect about chronic wounds is the absence of the hemostasis phase of healing.  The sequence of events that is normally initiated by hemostasis, clot breakdown with the subsequent release of growth factors is absent and has a tremendous impact on healing which is the starting point of a prolonged inflammatory phase, leading to chronic non-healing wounds.1,13,14,88

Many researchers have suggested that repetitive ischemic-reperfusion injury and local tissue ischemia induce chronic inflammation in peri-ulcerative tissue and are the leading precursors of chronic non-healing wounds.2-14  Ischemic-reperfusion injury is a common medical condition that is considered to be the underlying medical condition in many cardiovascular and inflammatory diseases.15   The pathological features of an ischemic-reperfusion injury include accumulation of leukocytes in blood vessel lumens and leukocyte extravasation, elevated expression of inflammatory cytokines with tissue destruction proteinases, and fibrosis of microvessels, which are all features seen in other types of ischemia-reperfusion injury.7, 15  The four primary categories of chronic wounds are: pressure, diabetic, arterial, and venous ulcers, which are the overwhelming majority of chronic wounds and all share these common causative factors.16

Local tissue ischemia and repetitive reperfusion injury impairs both the microcirculation and macrocirculation, and affects small vessel hypertension which is the initial starting point of inflammation within tissue.  Compounding this with pressure-induced cell damage, friction, and shear it leads to ulceration in tissue that is already deep within the inflammatory cycle, even before the wound appears.15

Once a newly created wound appears there is a rapid increase in bacterial cell counts with production of multicomponent extracellular polymeric structures, and further mobilization and recruitment of more inflammatory cells into the wound site.17 The microcirculation also begins to shows signs of fibrosis, as indicated by excessive deposition of type VI collagen and decreasing tissue oxygen levels creating the first signs of hypoxia.19  The presence of fibrinogen and fibrin is common in chronic wound and researchers have hypothesized that they scavenger growth factors and other signal molecules involved in healing.60  At this point, a newly created wound having by-passed the hemostasis phase of healing is now firmly locked into a self-sustaining state of chronic inflammation.18, 19

All chronic wounds are similar in that each is characterized by one or more persistent inflammatory stimuli: repetitive trauma, ischemia, or low-grade bacterial contamination.  Once the skin barrier is broken and bacterial colonization occurs,  inflammatory molecules from bacteria such as endotoxin, platelet products such as transforming growth factor β (TGF-β) or fragments of extracellular matrix (ECM) molecules such as fibronectin stimulate proliferation of inflammatory cells (neutrophils and microphages) to enter the wound.  These activated inflammatory cells secrete proinflammatory cytokines such as tumor necrosis factor α (TNFα) and interleukin 1β (IL-1β).  In acute wounds these cytokines are tightly controlled; in chronic wounds they are not.  When compared to acute wounds, chronic wound fluid contains up to a 100-fold increase in TNFα and IL-1β. 1, 20 – 22, 57, 58 Approximately 2 weeks after chronic ulcers start to heal, cytokine levels begin to drop and approach the levels found in acute surgical wounds.23, 27

The proinflammatory cytokines (TNFα and IL-1β) also synthesize matrix metalloproteinase (MMP) and suppress tissue inhibitors of matrix metalloproteinase (TIMP).1, 21 The chronic wound environment has been proven to contain elevated protease (MMP) levels and decreased levels of protease inhibitors (TIMP), when compared to acute wounds.20-22, 24-26   Matrix metalloproteinases play an important role in all phases of wound healing by promoting cell migration, breaking down extracellular matrix, and remodeling.  An imbalance in the microwound environment with increasing numbers of MMP’s and decreasing TIMP’s levels is associated with the degradation of collagen and growth factors and growth factor receptor sites as well as other vital components of the extracellular matrix.20-22, 24- 26 Once growth factors are degraded, communication between the various cells participating in the wound healing process stops and wound healing is delayed.59  As the inflammatory cycle is prolonged it amplifies the pro-inflammatory cytokine cascade leading to wound fluid which has been found to be absent of DNA synthesis.  This is related to the low mitotic activity, excessive levels of inflammatory cytokines, high levels of proteases, and excessive reactive oxygen species found in chronic wound fluid which in turn results in senescent or mitotically incompetent cells .20, 28,68

Once the inflammatory cycle is prolonged, it creates a “vicious cycle” which is  characteristic of all chronic wounds.1 The self-sustaining nature of this vicious cycle has far reaching effects.  As the wound shifts from hypoxic to ischemic over time the lack of available oxygen for metabolism leads to anaerobic metabolism which reduces concentrations of adenosine triphosphate (ATP) resulting in metabolic acidosis.  The reduction of ATP facilitates increased lactate with decreasing pH which excites nociceptors and produces activation of pH-sensitive ion channels, resulting in pain.81  Likewise, if there is sufficient oxygen for aerobic metabolism, then the by-product acid is metabolized into carbon monoxide and water, which is the final step of complete metabolism.  As a result, pain is alleviated or disappears.29 – 37  This may accounts for why acute wounds have lower levels of associated pain when compared to chronic wounds.

Incorporating biofilm development into the model of chronic inflammation may better explain the biochemistry and cellular biology of their effect on perpetuating chronicity and preventing healing.56  For example, chronically elevated pro-inflammatory cytokines (TNFα and IL-1β) increased MMP levels (MMP-2, 8, and 9) and increased elastase can be explained by the possible effects of a biofilm on the host’s innate immune system.38, 56 Biofilms may also influence fibroblast senescence, keratinocyte impairment and failure of endothelial cell to initiate angiogenesis.38, 56 All wounds have bacteria on their surface and despite this, may heal.39 Clinicians often associate infection with a number greater than 105 of culturable bacteria in a wound. However, a clinical biofilm bacteria may not culture, but it is still viable.40  Because biofilm bacteria are encapsulated in a self-made matrix of biopolymers that offers structural stability and protection they may not initiate the potent inflammation response that other planktonic, highly virulent, bacteria may produce and may be overlooked using traditional sampling techniques.40-45 It seems within reason that host responses and protease activity may be related to biofilm formation in the chronic wound.56

When cells die by apoptosis the cell membrane remains intact, thus allowing them to be recognized and phagocytosed by macrophages.  Phagocytosis is a major mechanism used to remove pathogens and cell debris from the wounds.  But when cells die by necrosis, they burst and release cytotoxic compounds that prolong the inflammatory response.53   Acute wounds heal without infection because of the microbiocidal capacity of these macrophages.1   For phagocytosis to be optimized it is dependent on an adequate blood supply with sufficient amounts of oxygen.54  A restriction in oxygen availability reduces the ability of macrophages to function at capacity, and may allow the formation of biofilms in the presence of low grade infections.  Macrophages ingest microorganisms and excrete products of digestion, namely ascorbic acid, hydrogen peroxide, and lactic acid as a result of phagocytosis.  Hydrogen peroxide aids in controlling anaerobic microbial growth, while the levels of ascorbic and lactic acids are interpreted as a need for macrophages.54, 55  This increases the vicious cycle of chronic inflammation as more macrophages produce more by-products, leading to a more intense and prolonged inflammatory response, which diminishes the ability of macrophages to recognition and remove cells, thereby promoting necrotic disintegration and perpetuation chronic inflammation.56

Free radicals are known to cause cell damage and function as inhibitory factors in the healing process.61-63  As this is a complex process, only a brief overview of key points will be discussed.  The production of reactive oxygen species (ROS) associated within a chronic wound can originate from several potential sources.65-68  During the healing process, various inflammatory cells; neutrophils, macrophages, endothelial cells, fibroblasts, and in particular senescent fibroblasts which are prominent in chronic wounds, are capable of produce superoxide.88-90  But, in chronic wounds activated neutrophils and macrophages produce extremely large amounts of superoxide and its derivatives via the phagocytic isoform of NADPH oxidases.69-70, 75   When polymorphonuclear neutrophils (PMNs) are recruited and activated at the wound site they consume an increased amount of oxygen, which is converted into ROS, in a process known as a “respiratory” or “oxidative” burst.  This burst requires the consumption of large amounts of molecular oxygen, increasing oxygen consumption by at least 50%.64  Resulting in the generation of superoxide anions.  Most of the superoxide anions formed are converted into hydrogen peroxide.71  Some of the hydrogen peroxide (H2O2) is converted into highly toxic hydroxyl radicals via the iron-catalysed Fenton reaction, creating a second source of ROS .72-74   Iron is released from hemoglobin by degraded erythrocytes, ferritin, and hemosiderin.76,82  High iron levels have been in the wound fluid of other types of chronic ulcers.66,82  An example of this is venous ulcerations which have excessive iron deposition in the skin, which is used in a Fenton reaction to produce excessive amounts of ROS, in this case hydroxyl radicals.77,82  These highly toxic hydroxyl free-radicals also enhance the synthesis and activation of even more matrix-degrading metalloproteinase.78-80,82,83

The presence of excessive reactive oxygen metabolites are not only highly toxic to surrounding tissue, they also increase MMPs while decreasing TIMP levels, creating a highly aggressive chronic wound environment that inhibits healing and deepens the chronic wounds inflammatory cycle.  In addition, researchers have found that oxidative stress is also responsible for fibroblast senescents in chronic wounds.84-90